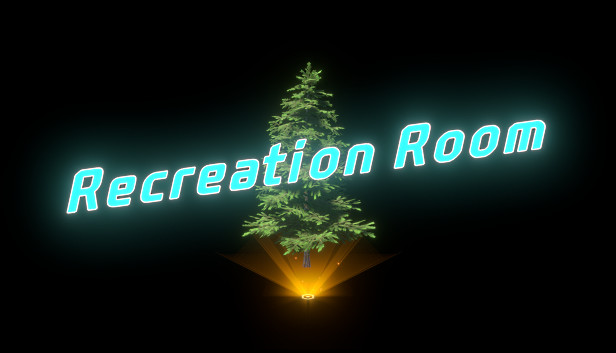 Recreation Room allows you to take a walk in a big variety of environments and landscapes.

NOTE: Recreation Room is currently in Early Access status. This means that it’s not finished yet, but you can still buy it and start playing with it. You might wonder why you would pay for something which is unfinished. That’s really up to you. You can wait until it’s ready or see its current state. Sometimes when apps come out of early access status, the price will be higher. You might also have some influence over how it’s developed as an early adopter. If that doesn’t sound appealing, wait until it’s ready. The current release date is projected to be in October.

Seeing the initial description, I was just expecting a forest simulator. It turns out that this is intended to be the basis for multiple environments, it’s just that only one is available now. You’ll be able to choose from an environment or even pick one at random. As it is now, when you start, you are in an empty space with a billboard to read. After very brief details about the app, you can begin your experience.

I found the environment to be very simplistic. There are hills, a few types of trees, and some mushrooms. The ground has a texture of the forest, but it’s flat, so basically a wallpaper. The trees “grow” in different ways, some are fallen, and they make for a dark environment. Of course, real forests also block a lot of the light from reaching the ground so it’s not totally unrealistic. I like that it also has paths through the woods, but you don’t have to follow them if you don’t want. It’s a very open environment that you can explore however you’d like.

The main interesting point about Recreation Room is that it actually generates the forest for you. Usually, apps like this include either a photogrammetrically captured environment, or one created artistically. In this case, it’s laid out programmatically so theoretically it’s could always be a different forest. This is a really great feature and allows it to be a nearly infinite setting. Instead of bumping up against the boundaries of a created/captured area, the app just continues to generate more terrain. It’s a great way to create a realistic location when it doesn’t need to be real.

There’s not much to do in the forest. You can walk around and simply be there. It’s nice to be able to just travel to a place and be there. There are no challenges or missions. It doesn’t feel very real, but it can definitely serve as an escape.

Overall, the graphics and sound are not very high quality. There are ambient sound effects to give it a nature feel, although it seems a little overdone to me. Birds can make a lot of noise sometimes, but it’s nice to have the quiet moments too.

The trees and fallen logs are very good in isolation. The branches and leaves are flat looking. From some distance they look good, but it doesn’t hold up when you get closer. In addition to the flat ground, there are patches of plants and the occasional mushrooms. Together, they make for good screenshots, but not as convincing in the moment.

This is a fictional environment with no informational content.

There’s no interactivity. You can’t pick things up and there’s no camera. It might be nice to be able to hold a rock to toss, pick up a mushroom, or even pull on a branch. It sounds like it won’t be very interactive at any point. There also aren’t any birds, flies, or animals. It’s a lot of work to create a whole ecosystem but adding a few living touches can go a long way.

Movement is a real low point. First, there’s no teleport option. I understand that some people don’t like the immersion-breaking nature of teleportation, but many of us can’t glide for long without feeling sick. Second, you really need to use both sticks to move. The left controller stick only allows you to move forward and backward. Direction is controlled by turning your head. This is a common way to move in desktop mouse-based games but doesn’t work very well in VR. You can also rotate using the right stick. Overall, it’s not very intuitive and it’s just not comfortable. Fortunately, more locomotion options are planned.

There’s an interesting feature where you can toggle the nose on and off. Yes, that’s right! Do you miss being able to see your nose in virtual reality? As it turns out, this is based on science. Preliminary findings anyway. For some reason, being able to see your nose in virtual reality is thought to help reduce nausea caused by virtual movement. I love the idea, but for some reason I wasn’t able to see a difference between nose turned on or turned off. Hopefully it’s just because it’s a work in progress. If teleport mode becomes supported, this won’t be necessary, but assuming there is still an option for smooth movement, I’ll be interested to see if it helps.

The initial release came out in June. So far there haven’t been any updates, but I would expect to see a few releases before it comes out of early access, especially considering the scope of what they’ve announced. The description for early access lists a number of features currently planned. If these all come to light, it will make for a much better experience. Being able to change the time of day, choose the environment (hills, jungles, reefs), stumble on caves and old ruins, and the addition of more locomotion options would be welcomed.

Overall, I’m not terribly impressed at this point. The general idea of generating a forest is great since it allows it to be basically limitless. Games like Minecraft are huge worlds in part because the terrain is generated so it doesn’t run out. The tree trunks, logs, and flora are generally decent, but the flat ground needs work. Since it’s in early access, I don’t want to be too harsh. I’ll take another look at it once it is released. If you decide to buy it early, just know that it might not be ready yet.