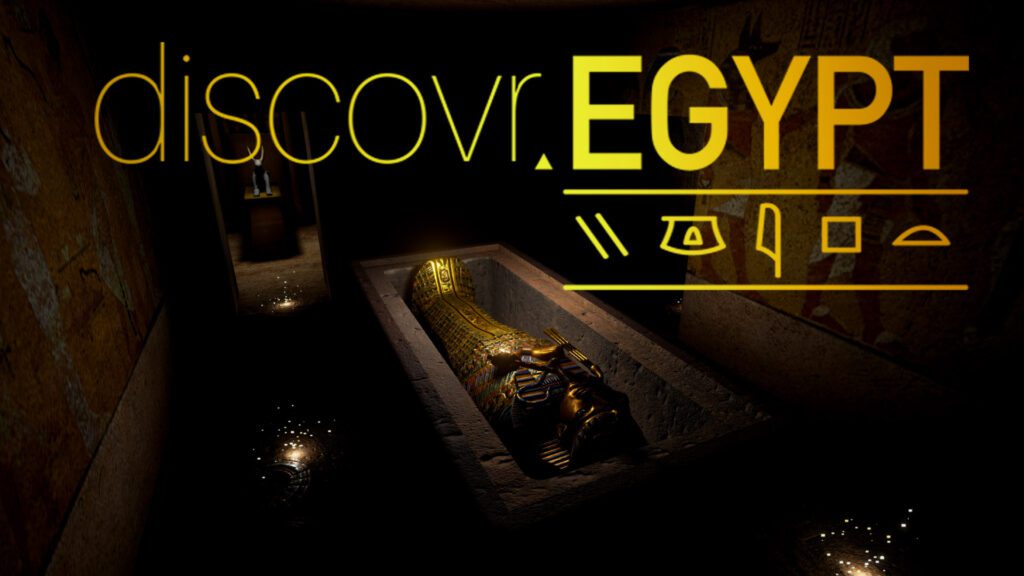 An historical mini experience (10-20 minutes) where you can browse the tomb or play a timed treasure hunt. […] Look around and learn about its contents in Discovry Mode, or take all the treasure before time runs out in Treasure Hunt.

More than just the inspiration for countless music videos, King Tutankhamon (Tut Ankh Amon) is an ancient Pharoah who generates wonder thousands of years later. Virtual reality is a perfect place to visit these historic figures, assuming it’s done well. In this experience, we get to see the tomb itself in its current form, no historic recreations. It’s to replicate a visit to Egypt and a special pass to walk around the tomb. Keep reading to learn more.

Upon launching Discovr Egypt, you are greeted with options to adjust volume and to choose between “discovry” and “treasure hunt” modes. The main difference between them is a checklist of items to find for a treasure hunt. My interest always lies in open discovery, so I went with the former.

The space is fairly minimal. There’s the initial hallway, the antechamber, the funerary chamber (the room with the coffin), and the treasure chamber. The antechamber and treasure chamber are full of various artifacts found by Howard Carter upon initial discovery. You can spy the Annex from the antechamber, but there’s nothing in it and it’s inaccessible anyway. Each item has at least some information to learn more about it. You teleport around to where you want to be and can shine your flashlight to see things better since it’s fairly dark inside.

As the product description states, it’s a 10-20 minute experience. If you really take your time, you could be at the longer end of that range. In addition to the various artifacts, you can also look at the painted walls. It doesn’t feel particularly real, so you aren’t likely to just stand around taking it in like in some titles.

For sound, there is background music and some general beeps to indicate actions. The music is fine and fits with the aesthetic, although it loops and becomes tiresome. There’s also a pleasant female voice to speak descriptions of the various items. The app has very little to read, other than titles of the items.

The graphics are pretty weak throughout. It’s from 2016, so there must be some allowance made for that, but it still seems like it could be better. It’s hard not to compare it to Nerfertari: Journey to Eternity although that experience was made two years later. In that case, the graphics were captured from real photo scans, while this tomb seems to be mostly hand-crafted items (digital recreations).

It appears that the wall paintings were captured photographically. From across the room, the walls look pretty good. They don’t hold up as you get closer though. Most of it is fairly blurry up close. I think it just wasn’t designed for the current generation of headsets so doesn’t have the graphical detail needed.

Points of interest are marked with round icons with “i” in the middle. When you touch them, they turn upside-down for some reason, a title appears, and you will hear a spoken description. These are a good addition and offer some needed context around the experience since it’s otherwise more of a jumble of items in rooms.

Navigation is a bit limited. You can point at specific sparkling points on the floor to teleport and touch floating “i” icons to learn about the items. This could be a problem for someone with challenges with reaching. You could theoretically reset your height, so you’d be effectively floating off the ground, but you’d probably need someone to help with that. Thankfully, most apps are better about letting you point to activate things these days. Reaching and touching is fine as one option but shouldn’t be the only one.

As mentioned, this is an old app by modern standards. It was probably a bigger deal at release. There have been no updates with quality improvements, so it’s stuck in 2016.

There isn’t much competition for whatever reason, so it might still be worth a download to see King Tut closeup. You won’t feel very immersed, but it gives you a feeling of the scale at any rate. Personally, a big part of VR is the ability to stand in the middle of a scene at real size. Photos and videos can’t replicate being in the middle of a scene. Even at lower quality, this is still conveyed.

If this wasn’t free, I’d recommend staying away from it. Considering it is free though, I’d say go for it. It’s a pretty small install and you won’t be worse for trying it. You might even learn something from the artifact details!

Even though I haven’t come across another VR title to recommend instead, you can look for Matterport scans or other 3d scans online. There’s a very high-quality model on Sketchfab that you can explore in virtual reality. It would almost be a perfect replacement, except that it’s missing all of the artifacts. Even the coffin is empty! It’s still worth it for the sharp details of the tomb itself though.