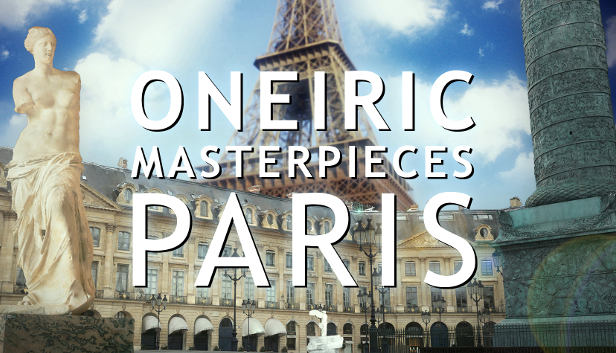 Here you’ll find more than 20 masterpieces among the most beautiful you could find in Paris (The Venus de Milo, The Mona Lisa, The Winged victory of Samothrace…)

Paris is a beautiful place to visit with so many amazing things to see. In stately museums and a multitude of public areas, there are paintings, statues, and diverse historic works. When I visited a few years back, I needed to go from place to place to actually find them. In Oneiric Masterpieces: Paris, they make it easier by bringing some of the highlights to Le Place Vendôme for an eclectic exhibition. It’s definitely more convenient this way, but that’s not enough to fully redeem this 5- to 10-minute experience.

According to Merriam-Webster, oneiric means “of, relating to, or suggestive of dreams.” I’m not entirely clear how this experience evokes dreams, but it’s definitely unreal how these classical works are displayed in the open air as seen here. The app presents a number of items to examine, but none of them are in their original or current settings. Placing them in this plaza makes it easier to walk around and see them, but it feels like someone took a grab bag of different 3d models and decided to just use all of them in a single scene.

The app lets you walk around (teleport) and see statues and other works up close. The description states 25 different pieces, all to be found in Paris, although I didn’t count them. It appears that they are all at scale, but I can’t easily confirm that either. It’s a decent selection of items, but also fairly random. Being set in this specific plaza is also a bit of a strange choice. There’s no context that I came across to explain this location and its significance. Wikipedia describes it as a military monument created in 1698 so perhaps it’s just associated with showing off great accomplishments.

The graphics are high quality, but I suspect they came from a repository/marketplace like Sketchfab or cgtrader.com. I would be surprised if they created these for this app. That’s not necessarily a problem, but when all the models are just acquired and repurposed, it makes it more of a low-effort production and harder to justify much of a cost. On the other hand, at only US$1.99 (at time of publication) the price isn’t out of line. That said, that’s the price on Steam. If you buy from Viveport, it’s 3× more expensive for some reason.

Performance is mostly acceptable, although at some points I would see some stuttering as my system did its best to render everything smoothly. Part of packaging models into an app is optimizing them so they look good from different distances and don’t overtax your system trying to keep up. Of course, faster computers have less trouble with this, but ideally the average system can handle most apps fine. It wasn’t anything too egregious, but it stands out when that happens.

There was also the ability to play music from a piano. I don’t understand why this was available other than as a creative way to provide background music. The music is nice enough, but it feels out of place this way. Of course, when viewing world-famous sculptures and paintings outside, what’s really out of place?

As with many similar museum experiences, you can toggle details for each work. This includes the name, date, place of origin, descriptive details, and more. The information is decent, although it’s a mix of English and French for some reason. I’m glad they included these details though since a courtyard of models isn’t enough to stand on its own.

Moving around is easy enough. I was able to teleport which is always my preference. Depending on your physical space, you can always choose to move around directly.

There is little interaction with the items, other than being able to trigger information popups, activate an audio guide, and use a magnifying glass. You can also rotate and scale the objects which is an interesting idea. I like the idea in principle but found it less than intuitive in practice. The magnifying lens also seemed like a good idea but was a bit awkward to use.

I think I’d like to see a museum app where you could hold the items in your hands. You would walk around as normal, but then the information popup would have a small rotating version of the object which you could reach out and take. Then you could use both controllers to stretch/shrink it, or just turn it around in your hands to see the various angles. The scaling and rotation just didn’t work very consistently for me for some reason.

This hasn’t been updated since release in 2017. I wouldn’t expect any further releases.

It’s hard to recommend this app very strongly. It’s a low price on Steam (avoid Viveport’s higher price), but it likely won’t take much longer than ten minutes or so to view its content. Depending on what you are looking for, this might be enough. It’s always nice to walk up to models at full-size and take them in. You can do this for many models on Sketchfab, but it’s in complete isolation. Even though the plaza is a bit of an odd choice, it’s definitely very Paris so it may suit you just fine.